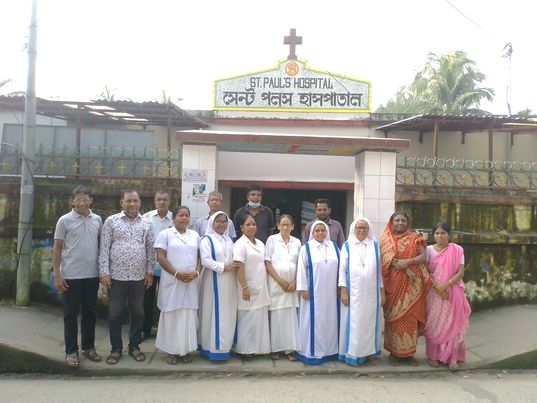 Chiapuri of beauty is the southernmost Sundarbans of Bangladesh and the people of Mongla nurtured in the shade of its beautiful trees. Fear of life, fear of death, fear of illness, fear of tigers, all kinds of fears. Due to its proximity to the port, the first missionaries established their base in this area.

Shelabuniya Dharmapalli, a part of Thulna Dharmapradesh, is made up of people of different professions. Foreign fathers were the first to be in charge of this religious village. A hospital was built here in 1975 to address the plight of the poor and needy. Sisters of the Queen Maria’s Companions Association of Preetigan arrived at Sadhu Paul’s Hospital near Shelabunia Dharmapalli in Mongla Port in July 1973.

Meanwhile, the LST doctor working with him, Dr. Subendu Yay, alias Dr. SK Roy – continues to work at Montubabu Hospital.But Bishop Michael A. D. Rosario, CSC, and the venerable Father Reagan, the priest, wanted to make Eka more beautiful as a hospital and work with government recognition. This requires an experienced registered doctor.

Father Reagan and Bishop searched in Dhaka and found a Christian doctor. And he is Dr. Francis Rosario, a resident of Golla. He started the work of S Hospital in Mongla with his family.

He is a good and experienced doctor. He has contributed a lot to this hospital. He saw that the hospital needed a trained registered nurse to be recognized by the government.So the Reverend Bishop and Father Reagan sent for a nurse from the Queen Mary’s Companions of the Apostles. With this, the union requested and sent Sister Mary Jenner to St. Paul’s Hospital, Shelabunia.

Xavier C. Sushila also came here in 1963 and worked with Dr. Fancy taking charge of the hospital. Sisters have contributed a lot to this hospital. With enough hard work he transformed the hospital, formed the nurses, prepared the GCINPA in the operating theater, and taught the nurses.

Currently three sisters are working in this hospital.There is also a Marine Sister Bernadette. In the first case, the sisters had no separate home. Sisters slept upstairs in the hospital.There is still something like before. However, with the improvement of civilization day by day, the quality of life of the people here is improving.

The hospital now has three M, B, B, S doctors. 2 men, 4 staff nurses, 4 boys are working in the dispensary and others. There are 2 employees during the day and 2 at night. At present the entire responsibility of the hospital is in the hands of SMRA stewards.

Through this hospital of Saint Paul, the eternal witness of human welfare in Uroro, the SMRA Sisters have sung the praises of the Almighty by serving the poor and needy people of the South.