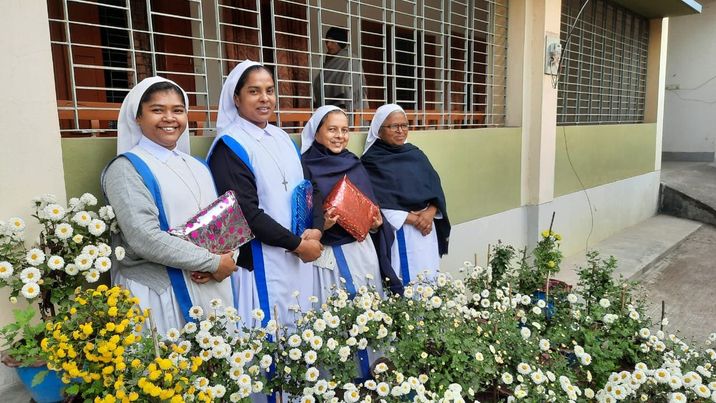 In the open space of nature, in the religious village of Baniyarchar built on the banks of the river His Excellency Bishop Bartholemia of Khulna Dharmapradem, With the revolutionary efforts of SX, the monastery of Sangini Sangha was established at Queen Maria of the Apostles. Second Vatican Congress It opens the door for remittances.On July 5, 1969, Sister Mary Imelda, Sr. Supriya and Sister Nivedita first started their mission at the Ashram. This is like a place to catch people in the Sea of ​​Galilee in Jesus’ time. The real background is “In the land of fish, I will catch your people and put them in jail.”
Sisters hear the melody of this call.

On the 13th of July, the nature of the rainstorm and the joy of Father Albaratan (Anton), revered by the local priests, merged with the missionaries gathered at Baniyarchar. Reverend Sister Mary Petra and a few others attended the great reunion. The newcomer Sister Trilogy is welcomed through Holy Christianity and Bichitra ceremonies. To provide bile field to SMRA Sangha in the new Dharma Pradesh. Shraddha Sangha Kartri sincerely thanked Bishop Mahasaya. He called on the local church to cooperate fully with the sisters.For a long time now, the joy of this day has been giving strength to the sisters in spreading the message of inspiration and service.

Sister Imelda, a Holy Family Nursing trainee, was used as a masterpiece in mission, dispensary and maternity care, along with the venerable Dr. Father Albaraton. Earlier, two doctors, a pharmacist and a nurse were involved in the service.Father intends to spend half the time on mission work Wishing a qualified nurse sister. Sister Emenda is the young doctor and mentor of the mission. Sick people from all the distant missions used to flock here in search of foreign doctor Father.Dr. Father’s compassion for the poor people began to awaken. Over time, Father Sister Imelda spends most of her time on missionary work under the overall supervision.Sister and sincerely gained popularity in a short time of service. In this way the reputation of the medical system spread everywhere.

The local children and adolescents were educated at the Baniyarchar Mission School. Since there are seven congregations here, other students also had a place in the Catholic mission. But the wall system and the apparent poverty pull the children back. As a result, the number of absences was higher.The mission carried the salary. Sister Supriya and Sister Nivedita became one and the same and engaged in building people.Applying sports, dance-song and teaching materials By bringing a new awakening in children.He went from house to house and established a sweet relationship by communicating with everyone. The benefits of modern method of education soon appeared.As a result of the awareness of the parents and the newborn of the teachers, the reputation of the school spread.

Reverend Father Albaratan was transferred to another place and was replaced by Reverend Father as a local priest.Rigger. He cultivated the land of Baniyarchar village together in a modern way and distributed the crop according to the land of each.The day laborers are miserable with decent wages When the light of hope shines in the minds of the people, it opens the way to live in a new way. Not only this, with the help of fancy and unexpected arrangements for the company.Lending Satini, Father Reagan became a god to the people by providing various jobs.The precincts of Saint Peter’s Dharmapalli in the heart of the secluded village turned into a joyous fair.Sisters are always in the forefront of everything. Harmony between Sister and Father is the foundation of human unity.If you do exceptional politics, your work, life policy will not be normal and the sound of free war will be heard in the country; The Pak-Pathpath was a river of blood in the attack of the Pak army.

Lost in fear, the young intellectuals are left homeless; The lives of the parents fled.In such a situation, fathers and sisters try to keep the people calm by giving advice as much as possible.Does. At this time there was a special need to send C. Nivedita and C. Viva to Dhaka. Sister Lillian and Sister Sahay came from Dhaka to accompany the sisters.

Special needs. Sister Lillian and Sister Sahay came from Dhaka to accompany the sisters.The houses on the other side of the river were submerged in the floods, and livestock was raised on the dirt roads along the river to keep them alive. The road was cut off overnight without seeing Upayantar. In this way, Baniyarchar was half full of water and brought back the balance.

Men and women of independent Bengal so that they can live their daily life without any hindrance For this purpose, the sisters formed various associations and took care of the spiritual development of all according to the class.He left the responsibility in the hands of the local people by expanding the realistic plan.Arranges Christian formation and training for young and old.Suitable training is given to the youth for the purpose of living meaningfully in the society. Sisters strive to maintain friendly relations with them. In order to maintain friendly relations with the seven congregations, he accepted their invitation and attended the meeting with them.

Sisters play a special role in running schools in Kaligram and Nayakandi sub-missions on the other side of the river. In the absence of the priest, they co-operated with the priest in conducting prayer-meetings and confessions, in preparation for communion classes.

The change of era is especially noticeable among the locals. Improving communication and political generosity have brought people closer to each other.The liberal attitude of the sisters and the touch of purity is what people now crave. So the Sisters are quite aware of their monastic life by observing the surrounding attitude with a keen eye.

You have to be somewhat introverted in order to protect your dignity in the field of inspiration. In the meantime, the environment has been conducive to the relocation of the school. The quality of education has increased manifold.
The sisters’ residence has been renovated into a two-story building with the status of a safe haven.

The financial condition of the sisters.

Financial misery is the adornment of the sisters. Selfless attitude The great sisters are very little satisfied.However, the mission has made arrangements so that a small crop can be found in the adjacent land. The sisters earn a small income by sowing the seeds by themselves.Baniyarchar is an exceptional religious village.Congregation of different churches here. There are also differences in the mentality of the people. The Sisters have come to gladly cooperate with the local church in this environment.