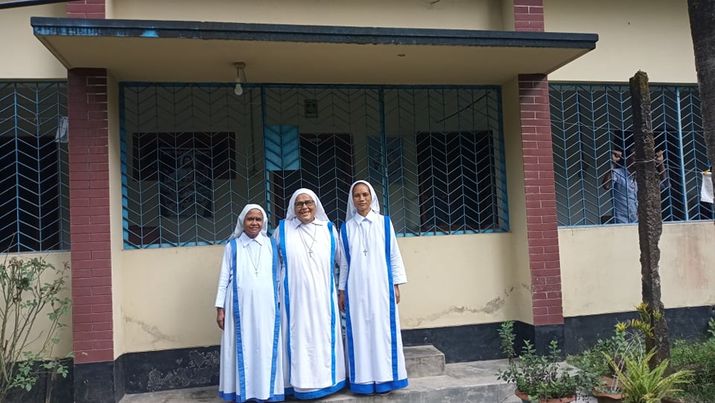 Faridpur Mission is a subdivision of Baniyarchar Dharmapalli under Khulna Dharmapradesh. A colony with 26 families at the corner of Rajbari on the road from Faridpur to Dhaka. Other than Catholics here are Muslims. There are also some Baptists and Hindus in the town. There used to be dense jungle here. People used to spend their days in indescribable financial deprivation. Financial deprivation on the one hand and the nuisance of robbers on the other.

After the war of independence in Bangladesh in 1971, men used to fish in the river and hunt turtles for money and food and girls used to work as maids in Muslim houses.The devotees who were baptized into Christ were poor but pious. So they went to the Baptist church for prayer.

A few years after the war, one day Father Gasparat (Italian) lost his bus on his way from Khulna to Dhaka. The bus driver took him to Faridpur Baptist Christians. The Baptists, especially Akshay Babu, introduced Father to the Catholics living in the slums along the Faridpur railway line. Here the proletarian sheep continue to grow and love the love of the shepherd. At first, the Fathers from Baniyarchar offered sacrifices for them in the Baptist Church and listened to their joys and sorrows.

After gradually purchasing land for them, they started living in Mission Colony from about 1975 AD. Catikhist used to come from Baniyarchar to help them in their atrocities. Later, from 1980 to 1982, they were assigned to a newly baptized Catichist (Peter Majundar). He could conduct worship on Sundays but could not teach religion.

Helping them to grow in devotion and faith by educating them from the side of the brothers and sisters of the poor and miserable colony and making them chariban people through moral education.The men here would go to the river to fish together and come back after 15 days. In the meantime, the women running the family had a hard time.

So to help them earn money through sewing and handicrafts, Father Rigali, the priest of Baniyarchar, talked to His Highness Bishop Michael of Khulna Dharmapradesh.The Queen of the Apostles proposed to send two sisters here to Sister Teresa, the companion of Mary’s companion.

Respected Sister Philomena went to Baniyarchar to visit the new work and Father Regali brought the Sisters to Faridpur Colony in order to respond to the new call of God and the church.Seeing the miserable condition of the siblings of the colony, Sister General felt the need to come forward in their service. Sister Meni Virginia and Sister Mary Santana were nominated for the new inspirational work of the association.

On January 19, 1982, Mary Grace, the director of the Ashram in Baniyarchar, came to Faridpur Colony with Mary Virginia. There St. Mary the Virginia Catholic stayed for a while at Peter’s house and with his help visited the family of the colony. He also met the Catholics in the alleys of Faridpur city.Note that at that time there was a three-day meeting in Baniyarchar. During the meeting, Reverend Bishop Michael explained to Virginia the management work here. Officially, he came to Faridpur on 1 February 1962 with Sanghakar and C. Monica, C. Virginia and Sister Santana.

People accept them with sincerity. Meanwhile, Father Tanino Baniyarchar was appointed as the Pali priest of Dharmapalli. On February 2, Father Tanino PBA offered Christmas greetings and welcomed the sisters. Sanghakarie C. Tereza requested the people to cooperate.The sisters united with the brothers and sisters of the colony and devoted themselves to their service. In the year 1990, a new building was constructed for the sisters considering various issues.

The basic work of the sisters was teaching the school, visiting the family and listening to their joys and sorrows. Every morning they offer morning prayers and morning prayers with the people of the colony. Conduct worship on Sundays in the absence of the fathers,First Communion of Initiation Candidates, Preparation of Hosarpan Candidates, Pre-preparation of Young Women for Marriage, Besides Shishu Mangal Samiti, Youth-Weekly prayer meetings for women who have done YCS with young women, meetings and prayer meetings for the children of Virgin Mary and older women once a month.

They conduct spiritual preparations for various festivals and churches, go from house to house on the cross during austerities, and offer prayers in the same way in May.They also bury the dead in the absence of the priest.

Working with women for financial gain.

The sisters worked tirelessly to help the women and young girls of the colony earn a living, in addition to their spiritual and moral values. Sisters teach a woman from Shimulia the work of the palm leaves of the women of N Colony. As there were no date palms in the colony, the men used to fish and collect date leaves. This work was going well but later this work was stopped due to lack of date leaves. In addition to leaf work, they are also given training and other work. It can also be said that high level people of different organizations apply for jobs for their work. The good news is that some people have found work with the help of sisters. They are still doing that work.

A girl from the colony has received a call to life. On the other hand, the Sisters are still helping in various ways in the field of spirituality, but as the aspects of financial aid are obsolete today, there has been a moral decline among many young men and women in the colony. Since 1972, the Sisters of Queen Mary, the Queen of the Apostolic Apostles, have been serving them selflessly in the face of adversity. Mother Maria is with them. At present C. Gloria and C. Suniti are working efficiently.