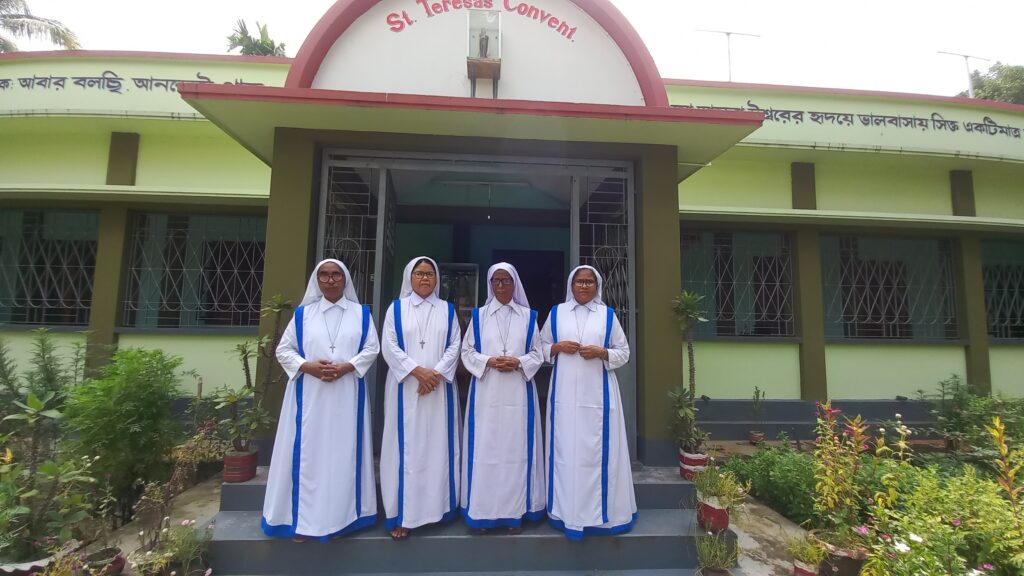 In the year 1910 AD, he was attracted by the dedicated efforts of the revered Father Manna CSC, the high priest of Gournadi Dharmapalli in Dhaka, and devoted himself to God with devotion, love and sweetness. Tadre submitted his application to the Catholic Church, expressing his willingness to join the Catholic Church.

They were initiated into the Catholic Church with the help and efforts of the village priest. Thus the beginning of Catholicism took place here.

At that time communication system in remote areas was very difficult. The only vehicles were boats and walking. It was very difficult to maintain contact by walking 15/20 miles.Thus, in the sincerity of the Gournadi priests, including the Christians, Dharmapala Joseph Lagranda of Dhaka Dharmapradesh, approached the CSC and humbly appealed to them to form a separate Dharmapalli at Narikel Bari. Respected Dharmapala thought about their problem and granted it. The establishment is the new Dharmapalli Coconut House.

On January 2, 1997, the history of the Queen Mary’s Companions’ Association of the Apostles began.
The arrival and departure of the sisters of different associations caused a lot of problems in Narikel Bari Dharmapalli. Especially after the departure of the MC sisters, Pala priest F. Sylvester Rosario felt the problems of women and young girls and the lack of medicine houses.

Many patients were crowded because the sisters gave free medicine.Reverend Dharmapala informed Perek D’Rosario about the needs of the Sisters and appealed for the Sisters. The Reverend Bishop shared the same thought with Sister Preeti, a member of the Apostles’ Queen Mary’s Fellowship Association.

Responding to the call of Dharma Pal, the revered Sanghakarie C. Preeti and her assistant Mr. Pragya Narikel came to the house and inspected the sub-centers in Dharmapalli. After talking to the ministers, it was decided to send the four sisters to Narikel Bari Dharmapalli. It is to be noted that ten years after the SHC Sisters ceased their activities, the Sisters of the Queen Mary’s Companions of the Apostles arrived at the Ashram.

On January 2, 1997, the three Philominas arrived at the Narikel Bari Sadhvi Tereza’s Ashram at around 5.30 pm along with three starters – C. Yashomayi, Sinara and C. Rikta. On the 4th of January, the revered Dharmapala dedicated Christendom on the occasion of the arrival of the Sisters. The bride joins the Christians in Christendom. He later greeted the sisters and welcomed them. The sisters returned to Dhaka on 5 January and from 16 January the four sisters settled permanently.

The first four Sisters to arrive are: C. Yashomi, C. Sarah and they will be assistants, C. Anna Maria and Sister Rikta will be working in Catechist and Muffsball. As a result of the subsequent exchange, different sisters are working in Ethan. On February 8, the hospital was in Kola. The priest blessed the hospital. The Christians said goodbye sweetly.