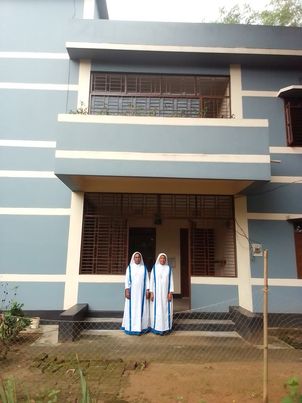 The Maria Bhavan Ashram is the center of the pious service of the sisters of the Queen Maria Sangini Sangha of the Apostles in Mymensingh Dharmapradesh.Sisters have been staying in this ashram for a long time and have been performing various duties in the patient care and mob area.In the year 2006, His Excellency the Bishops of Mymensingh Dharmapradesh, realizing the need for service work here, proposed to close the Ashram.At the same time, the revered bishops gave a message of hope to our revered Sister Dipti.

He also promised to open the door for new service activities in Dargachala. There the Sisters will look to preach Christ in a new way in a new environment.The door of the new ashram of the Sangha was opened on the 27th of 2006 in the eastern horizon. For the first time, Sister Bandana, Sister Theodora and Sister Pujari became the residents of the ashram here.