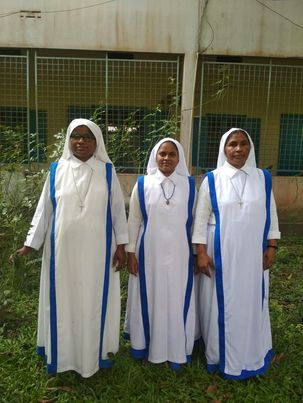 Mariamnagar Dharmapalli, which is part of the present Mymensingh Dharmapradesh, belonged to Dhaka Mahadharmapradesh till 196 AD. The Mariamnagar Ashram was established in 1951 by the then Archbishop Leo Lawrence Grener, CSC. It was in the first parish field of the Silesian Sisters.Later, during the reign of Father Michael Rosario (now retired Archbishop) in 1974, the SMRA Sisters were entrusted with the responsibility of introducing the monastery.Revered Sisters Mary Xavier, Rita, R. Emmanuel and R. Elizabeth Sabande performed the charitable work on the mission.

Dhyana-Gambhir Mariamnagar Ashram is located on the banks of the river Mercy, which flows from the Tura hills in the north of Mangmansingh.The characteristics of the Garo tribe, who believe in animism, are to maintain their independence as a group. Over time, the nation grew in number and settled permanently in the southern suburbs of various problems. Usually agriculture is their occupation.

They are accustomed to live a simple, quiet but joyful life. Superstitious, they are ignorant of health and dependent on nature as worshipers of distinguished energy. This nation has been neglected by all previous governments.They are out of touch with education, medicine or modernity. So people of all ages would die prematurely without treatment. It goes without saying that there was no communication system.

The arrival of native sisters in the immediate need of the local church.

As the Salesian Sisters skillfully prepared for the long 12-year field service, the light of hope shone in the hearts of the local people. Later, when the situation in the country became cloudy, it was announced that foreigners would be barred from staying at the border. At this time the torture on the mandis increased. In this situation, Archbishop Grener, CSC 1984, directed the sisters of SMRA to go to Dharmapalli in Maryamnagar.

The local Pala-priest welcomes the sisters. Respected C. Xavier Dispensary and Patient Services, C. Emmanuel and C. Mary Elizabeth School Teaching and C. Rita engaged in social work.They have to get special speed in using language in action. The sisters, in cooperation with others, tried their best. At this time new dangers hit the doorstep.

Many of the Mandi brothers and sisters migrated to India in fear of the Pak-India border war.Their property was destroyed by burning houses. The sisters took refuge with the Dharmapalli and the people. Gradually the situation began to calm down.

The second and final stage of motivational work.

Until 1971, the sisters lived in a simple fenced house next to the cemetery. Here, too, the sisters became friends of the temple with their devotion and sincerity in the field of education and patient care.Elizabeth, Serozlin, and Helen were newly appointed to the monastery. The coming of Jesus Christ is to endure persecution with the people.

I did not come to give peace – in the middle of 1971, let Christ repeat this saying.Sisters are ready to risk their lives. He accepted the will of the church authorities into his life.They sympathize with the welfare of the endangered shepherd. Reverend Father Damien tried but failed. Eventually, Father and Sister went to India with the people armed with fighting weapons, crossing forests, rivers and canals to survive.

The success of Ashtakalyan Bani in life.

The sisters responded fully to the actual mission work. C. Elizabeth, C. Roslin, and C. Helen find the warning of noble life.
Along with the officials of the organization, they witnessed the Christian service among the Bengali and Mandi refugees sheltered in various camps in India. Satisfying the food needs of the needy and helping them to meet the basic needs of life. This was the reality of the sending.

Everyone praised the work of the sisters. After finding the ashram of the sisters in India, the sisters spent the rest of the time there. Sisters’ lives are blessed in a long 9 month orphaned family environment.Later he got the opportunity to return to Mymensingh by another route. This is an unimaginable event, another ordinary Christian experience, a memory of joy and sorrow. Mandi is an unforgettable event in the regional history of the siblings!

The huts of the sisters were burnt during the freedom struggle. So the house of the fathers was repaired for the sisters.
Everything burns on furniture and other things. Collects reusable materials by working hard in the empty house. Reverend Archbishop Theotonius Amal Ganguly, under the direction of the CSC, repaired the house in a new way as a security measure for the kind and pious Pastor Sisters, which still survives today.

It is advisable to follow different methods in sending to fulfill the special purpose of Dharmasangha.The Sisters were keen to keep in touch with the people of the educated area. So continue your efforts in various fields.

Increase the quality of school education.

There has been a junior high school here thanks to the efforts of the revered Pala-priest.At present, under the guidance of a sister, the teachers form their own group of children and adolescents as good citizens. Everyone is also attentive and diligent in increasing the rate and quality of education with suitable education in other private schools.

The characteristic of SMRA sisters is to form Sangha-Satimi. There is also a separate association for shade and women’s water. Moral education, religious education savings, etc. are being worked on in a class-oriented manner.

Training of young men and women.

Initiatives were taken to participate in Christian training courses for young men and women. They are being formed like normal minded people through dialogue and exchange. They are now proud to be modern Bangladeshis. The sisters also manage the hostel here. In this, girls are being brought up in motherhood. It has also worked as a helper in shaping life. Many girls are able to choose their life path.

The pre-existing activities are expanding day by day. The nurses are being trained to be aware of the role and responsibilities of mothers in witnessing life for life by receiving innovative training. Sisters also spend time on first aid, cleaning, sewing, and other housework. Efforts are being made to visit the family to increase happiness and peace in the world.

All the activities of the mission are being done in collaboration with the sisters. They do not hesitate to take part in the day-to-day activities of the local church. They are waiting in the hope of serving with a helping hand next to a priest who resembles Mother Mary’s ideal disciple.

Today the ideal of nobility with the progeny sisters exists in the intimate life of the inhabitants of Marynagar.This Christian identity is the main feature here. This Maryam Nagar Ashram is the abode of safe nomadic life.