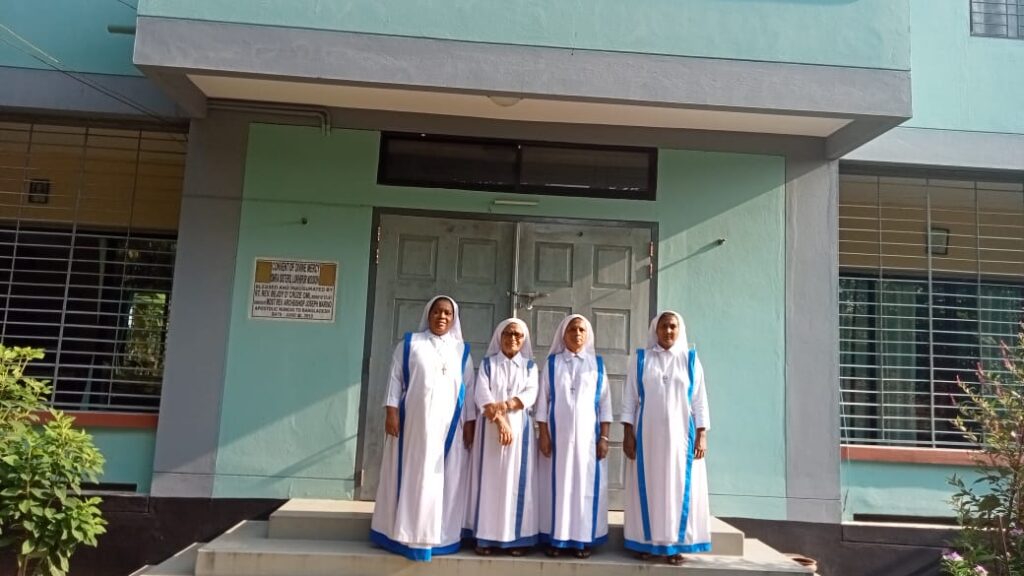 On the threshold of the 21st century, SMRA is at the forefront of the organization’s mission.March 3, 1994 is the day of life sharing of the sisters of SMRA Sangha with the people of Laxmipur Mission in Sylhet District under Dhaka Mahadharma Pradesh. Lakshmipur is the daughter of Archbishop Michael Rosario. This is the place where the beloved Banani of the mixed tribes of Seema is. Revered Father Subad Costa, OMI. Sister Mary Preeti of Sanghakar, in the fertile liberal parietal field under the management of SMRA. Sister Mary Geetika and Sister Mary Francisca, the director of the monastery, entered the monastery for the first time.

Desiya Sangha is a reliable child of Maha Dharmapradesh. Earlier, there was no ashram of SMRA in Sylhet area. The Holy Cross Fathers first entered the area to hear the new sound of Christ’s good news.They began to sow the new meaning of the message in the lives of many. Their perennial crops grow admirably. In the light that the Fathers, who were able to penetrate the deep forest, sought light, the herdsmen of the forest received the new sun, Christ.

Due to the scarcity of Holy Cross Fathers, the Ablet Missionary Fathers with great enthusiasm took charge of the dispatch to the Kulaura area of ​​Laxmipur. More workers are needed to spread the word. It is not easy to proclaim God’s word directly to the poor. Above all, man is true, not above him. The SMRA in Srimangal was ready for the work of the Sangha, but it was not possible to go there.As soon as his heart’s desire was expressed, the SAMRA Sangha got the right to light the Mars lamp in Sylhet district for the first time in his will and with the cooperation of the Ablat Fathers.

Marina, Ratna, Kalibodan, Kapana Hills, Sagar Nal, Fultal, Rajki Bagan, and various other capitals in this new wide open desert association.Habitats of mountain beasts, unsuitable for human habitation. Garo, Khasia, Urang, Munda, Kharia, Bonarbi, Kar Tirki, Khaya, etc. are all settlements of fearless Sanads. Hindu-Muslim family members are all anagona. The people of these groups have the habit of wandering around just like traders looking for a livelihood. The Lord has so much mercy for them.

On March 3, 1994, Simeri Geetika and Sr. Mary Francisco arrived at an unknown place on the Jayantika train. She was accompanied by her mother-in-law, Simeri Tereza, Siophilomina, and her guide, Father Abel Costa. They arrived at Laxmipur Fathers’ house in a mission car at midnight.

After eating and drinking, C. Geetika and Francisca went to the MC sisters’ house and stayed at the other two father’s houses.No ashram has yet been set up for the new sisters of the SSRA. The first three to four months from the MC Sisters’ Ashram, they muffled. It was the MC sisters who helped them.

The MC Sisters made all the arrangements for the meal before leaving for the original Bhati workplace Marina Tea Garden on 5 March. The Baran ceremony ends with Christ. Introduction to the nearby Garo and Hindu families. The people accepted the sisters with satisfaction. Thus, on 5th and 6th March, with the help of Father Subas, the sisters became known in various gardens and capitals and continued their work.

The experience and perception of the sisters.

The experience of loneliness, the perception of emptiness that the two sisters had before entering the completely new environment and BCA workplace is indescribable. The two sisters seem to be drowning in the sea. In the deep forest of unfamiliar people, the good and the bad of the new Jaya are overwhelmed with fear. The MC sisters cherish and cherish them.

Guardian-like MC Sisters accompany them in the initial preaching work. On March 7, at the end of the Christmas procession in the garden called Karimpur, he met Kharia, Mundu, Urao, Hindu people and different classes of people. On March 7, the main vineyard entered the marina in Father Subas’s car. The sacrament of the church is the abode of the sisters.

Various hills, Jalai Baithang, Panchpeer, Uro and South Panchpeer Jalai Gogala Chara and Ratna tea gardens are visited and people are exchanged with sweet smiles and simple glances.In this way he spent some time with the inhabitants of the dream kingdom.

The days of other sangha ashrams.

The MC Sisters, like the Sister Sisters, prepared the SMRA Sisters for a long four-month service. In Bratiya life, it is not easy for the sisters of the two associations to live together and cooperate. But the sisters have won.Laxmipur Ashram is the base of work in the Marina. For most of the month, preachers traveled on foot to various parts of the Marina. They are satisfied with the little food they have earned and forget all the fatigue.

In search of shelter.

Within three months of the empty-handed campaign, work on the ashram for the Laxmipur sisters began. This place belonged to a Muslim gentleman.The sisters themselves made the forested environment suitable for buses. Returning from the marina, he forgot his fatigue and worked hard. The open courtyard is surrounded by saplings. Thus the Sisters’ Paritik Ashram was created.

After a long wait, on May 29, 1994, a house was built in Laxmipur in a very short time. His Highness Archbishop Michael Rosario and the Ablelet Fathers gathered there with great joy. The unfinished house is blessed with pomp. Revered Sister Mary Preeti M. C. Philomena, Sionivedita was present on this auspicious day.

July 22 is a good day to fulfill hopes and aspirations. After walking eight miles from Marina, the two sisters unlocked their new home in Laxmipur. They entered the empty house with tears in their eyes. Collected little things from nearby houses.
The poor Sisters of Christ obeyed God’s will without complaint. Wearing the crown of poverty is the white garment of the devotee. This testimony of the sisters is of great value to the devotees.

The key to a successful career.

Sisters’ daily chants in all the sending of the association. 1996 AD The ashram was renamed Maria Bhavan. Like Maria, the sisters are happy to perform with their own hands. Both sisters were working from 1994-96. Four sisters have been working since January 6, 1997.

The Sisters undertook a variety of philanthropic activities to meet the needs of the local church, thanks to the association’s grace. The sisters are managing the Marina and Yata tea gardens. One of the main responsibilities of children is to build their minds. Prabhat improves by creating unity among them, trying to get the children to go to school with school uniforms and all the necessary equipment. The benefits of teaching awareness about the values ​​of life create a new stir among the parents.

The technique of arranging a little tiffin for the needy and bringing a smile to the face evokes an unexpected response among the students. Following the order of public education, Parents’ Day celebrations, annual reporting, award distribution meetings, action competitions, performing religious dramas, etc., each of these topics-centered programs inspire new efforts and awareness among all.

Distributing Christian love by sharing life with people in the Mofasbal area is an important task. Making money is a human need. By using the strength and intelligence of the boys and girls in this regard, the sisters work in vegetable gardens, flower gardens, collecting wood, fetching water, washing clothes, etc. Teach the sisters to earn with their hands. The money raised is their initial capital.

Sisters keep accurate accounts through savings. Parents buy goats and chickens from their children’s savings; Quotes are stored. In this way, at the initial stage, the loan association arouses the desire to save in the mind of Masush. They are making significant progress by adopting general education on health, natural family planning, adult education, family rearing, etc.

The sisters are engaged in the missionary work of the mission and form the association to manage it, teach policy matters and so on and are working successfully.

Dividing into two groups is a new step for the sisters going to Moffat. After spending 10/15 days outside, the exhausted sisters rejoined the spiritual family, realized the deep and intense pure joy and shared their affairs.Monthly solitary pursuits, community meetings, within 5/6 days after rest, return to the Mofasbal area with spiritual, physical, mental strength and morale. This is the real work of preaching the good news directly.

The archbishop bears the expenses of this monastery under the Mahadharmapradesh. Relying on God in their inconvenience, the sisters try to meet their needs by planting vegetables in a small yard.

It is the pride of Bangladesh Ramdali that the Sisters have shown spontaneity in sending people to the border areas exclusively as relatives of Christ. This is the clear silence of the good news.