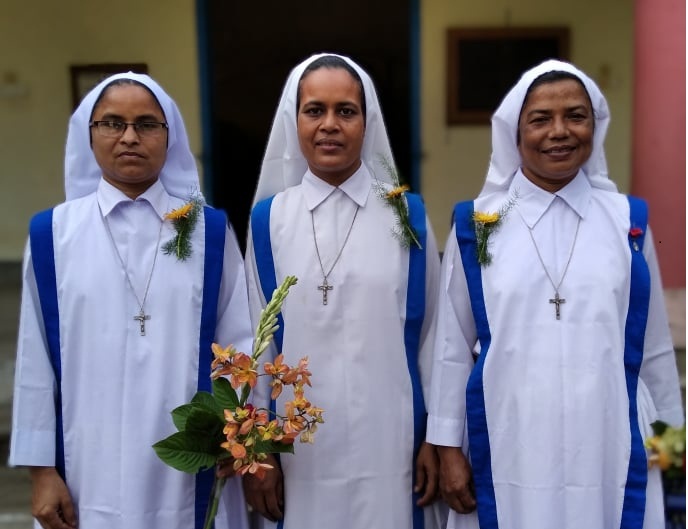 First we go to the upper chapel in the morning to offer Christmas. After the breakfast, the Bishop paid homage to the four sisters at Dhanjuri Dharmapalli where the first work of the SMRA Sangha was written in the heart of Dinajpur Dharmapradesh.
The school children are taken from the gate to their destination on their own farm. The sisters are congratulated through foot washing and cultural programs and are taxed among themselves. The ceremony was attended by Rev. Father Carobin Bakla, Deacon Vidya Varman, Regent Apu, Rosario C, M, C school teacher Pargana Pime Sistergon and several Christian devotees.
The main purpose of coming to our association is to provide services through teaching.

At 3:00 pm, P: May: Sisters, working in Dhanjuri, arranged a water supply. Newcomers Sister Christina and Sister Genevi cut the cake and started the watering. Afterwards, Rev. Father Kerobim Baklar, the pastor of Dhanjuri Dharmapalli, handed over the responsibility to C. Christina and C. Knowing that Bishop C. General and C. Prakash left for Dinajpur.

Our two sisters stay and eat in a 3-room building on the south side of the leprosy hospital. The Sisters, who are not new to the house, live in this building and are accommodated with their fathers in Paris. His Excellency Bishop Majes Costa of Atishatbar Dinajpur Dharmapradesh arranged a new two-storey building for the sisters at SMR.

The Sisters have been living in the house since 2006, and they have taken on the role of new entrepreneur. Even then, the sisters used to dine with the fathers because they did not have a kitchen of their own. Later, a small tin house was built for this purpose. This is how the life of the sisters goes on. Later, Sister General Shraddheya Sister Anita, Sisters, seeing the plight of their sisters, beat the roof and built a kitchen with two rooms and a front porch.

On the other hand, a three-storey school building is being constructed with the financial support of Waldvision with the approval of the Bishop and the tireless efforts of the SMR sisters to improve the education of the children. The headmistress of the school was the revered Sister Mary Christina, SMRA. Ms. Mary Genevieve and other local teachers worked as co-teachers.

The name of this school is St. Francis Xavier Junior School. Later, through the efforts of Sister Christina, the ninth and tenth grades are opened and the school is upgraded from junior to high school. During this time, the 10th class students participated in the SSC examination in the name of another school and passed the exam three times in a row in the year 2008/9/10.

On February 9, 2009, Sister Christina was transferred to Dhaka and Sister Genevieve SMRA took over as the headmistress. In 2006, Sister Samarpana and C. Florin worked in Dhanjuri. In addition to teaching, the sisters visited the village and for a few days at Christmas and Star, they have been in solidarity with the devotees and have sincerely cooperated in celebrating these festivals from the village. In this way Sister Gon continues to give generously to them.

In 2014, Sister Genevi was transferred to Chole in Dhaka in May, and Sister Mary Mitali returned from the Philippines with a degree in Misology and took over as head teacher in Dhanjuri. After taking charge, C. Mitali performed many developmental activities of the school in collaboration with Waldvision through his strategic ability.

But later the sister could not stay there for long because of the environment. With the departure of Simitali, Simri Ashis took charge of the vacant place. After Ashish was transferred to Chole in Dhaka in 2020, Sister Mary Jolly took over as the head teacher on January 21, 2020 and has been her head teacher at least with dedication.

. At this time, the superintendent of the ashram, Mr. Mary Aratiya and Mr. Atoshi Sister cooperated in the overall work of the school and it is still going on.

This paddy field mission is to serve the SMRA sisters among the tribal siblings in Dinajpur Dharmapradesh. Here, according to the charisma of the Sisters’ Association, they participate in all the activities of the Dharmapalli through meditation, prayer, unity with Christ, and education and social welfare. Sisters are donating themselves for the expansion of the kingdom of heaven in the church of Bangladesh. May the service work of the sisters in Dhanjuri be successful, beautiful and full of success and fans
I wish this for the welfare of the people.