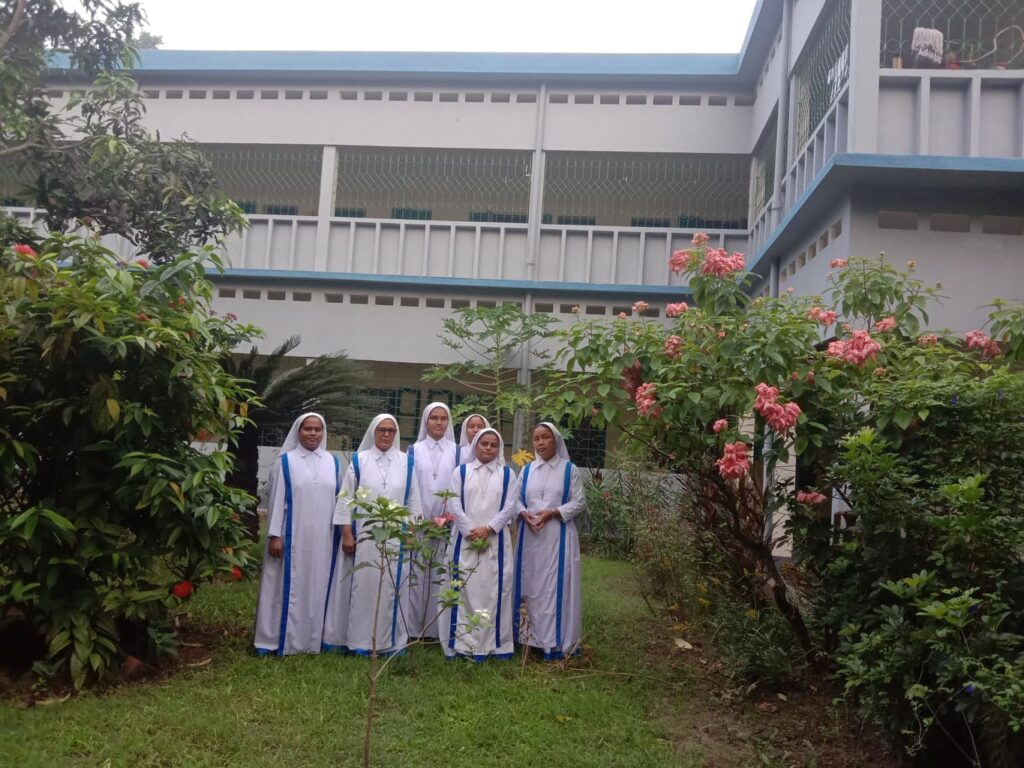 Lilav’mi – the Dharmapalli of Lurderani Ma Maria, in the lush green forest of Nibir near the Barind V’Mi in Rajshahi.
Where many animals of the Sundarbans roam happily in the secluded solitary forest. That deep forest is Rupnil Panpara in the hustle and bustle of public life today.Over time, a few brave Catholic families from the remote Bhawal area set foot on this inaccessible path and settled down with deep hopes and aspirations.They clear the forest and build their own homes. The word of Christ became an angel, building houses and sheltering the indigenous people.In it they embrace Thristra and begin a new chapter in life. Forests are suddenly turning into rural life.

Ma-Maria Greta Primary School (1930 AD) and later High School College were established with the aim of educating the people. Sewing Centers for the Financial Development of the Hungry-Poor People Sisters come to the PIME to facilitate the treatment of sick sick women and children. And the patient in the dispensary worked hard to spread the word in the village.

The beginning of new steps.

After 52 long years, the PIME sisters have worked hard and relentlessly to spread the word of Jesus in the remote areas of Bonpara. By making the people financially and spiritually self-reliant, by completing their motivational work, they have severed their long-standing bond of love and affection with the people of Panpara and moved on to another. Say goodbye to the people and them with a heavy heart and in the meanwhile the activities of the sisters ended on Sunday 2nd May 2018 AD.

On Friday, May 19, 2018, the apostles had a good time in the company of Queen Mary. In the Dharmapalli of Rani Maria of Bonpara Lourd. In response to the request of His Excellency Bishop of Rajshahi Dharmapradesh Jarvis D.D. Rosario, the mother of the Sangha, Reverend Siminti and her ministers directed the Sangha.Philosophically, in accordance with the Constitution of the Union, Christ and his mission, especially children, adolescents, boys, girls, women, took new steps to implement unconditional and joyful cooperation between the poor and the afflicted.

For the first time, Sanghamata Sister Mary Minti and Assistant Sanghamata Shishuvra came to Bonpara with 5 sisters. The sisters are Siamese Arpita. Antony, Linda and Anita. The Sisters began their new journey to the Ashram of the Heart of Jesus in the Bonpara Dharmapalli, bearing witness to the gracious and philanthropic work of the Sangha with great enthusiasm in the new work as per the personal call.

As soon as the sisters got off the Bonpara Baipal bus, they saw that two fathers, a manager and a brother Parimal were waiting to greet the sisters. They brought the sisters on a mission.In the evening, the children of the hostel gathered in the courtyard of the old church to receive the Seminarian Fathers and the staff of the mission, and greeted the indigenous brothers and sisters with flowers.

Since May 20, the Sisters have accepted Mother Maria’s role in the service of the afflicted. The beginning of their relentless non-stop work.

In the medical field.

At the end of Christmas on Sunday, May 21, the Pastor Yogana said that from Monday, May 22, the SMRA Sisters will give medicines to the patients in the dispensary. The next day, a small number of patients were announced. But on the 2nd day about 60 to 70 patients came. This is how Hindu and Muslim patients started arriving.

The nurses are visiting the patients, giving medicines, examining the pregnant women, visiting the homes of the sick pigeons and serving them sincerely with hard work. Sisters’ sincere service to children and pregnant women Sisters sometimes distribute free or low-cost medicine to the poor to instill confidence in local Christians. C. Arpita has served very efficiently as the in-charge of the dispensary and C. Anita has gained popularity in a short time by being a collaborator and at the same time sincerely serving the patients.

A few months later, he donated his lively and skillful service to the patients and patients. Long 3 years 3 months as an ideal nurse has skillfully served among the patients as the director of the ashram. Vamika has acted as a director, sometimes as a grandmother, sometimes as a friend. Her interest in pastoral work is unmatched. We could not save such a great and lively and joyful Sannyasabrati from the clutches of Corona. Corona really took him for granted.

I lost the invaluable resources of the association. C. Jasinta was gradually given the charge of the dispensary. Sijasinta and Shyamoli both provide exceptional care to the patients. At present, S.Sudipta is in charge of 3 trusted Manila employees including Shyamoli from the charge of Inchars and is providing sincere service to the patients. Thus the reputation of the medical system spread everywhere.

Sinters use a variety of teaching methods and materials to develop children’s latent talents, The children try to make the children and teenagers passionate about education and make life happy by arranging dust for playing dance songs. Niran worked hard to awaken moral and spiritual values ​​without scriptural teachings. In order to acquire skills in the field of education, in 2016, C. Linda and C. Naibedya did not study A.Ed training. At the Teachers Training College.

Indigenous poor shadows from far-flung areas study from hostels. Apart from Christians, Hindus and Chhais are also getting the opportunity to study here. In order for the shadows to develop religious and moral values, in addition to their studies, they are given various structural policy classes and their personal development is assisted through personal meetings.

Routine followers have recreational arrangements including study, physical labor, rest at their appointed time. In 2016, SMRA took charge of Sistergun Hostel with 64 people. Simeri Linda was in charge of the hostess and Sr. Mary Naibedya was the assistant in charge. In 2016, Sirikta and currently in charge of Ceclamentina.

The sewing center, set up by the PIME sisters with poor, helpless women, is now run by SMRA sisters.After the departure of the Sisters to the PM, Simeri Arpita got the first responsibility. She is working with women. The beautiful use of the sisters, kindness, compassion has shed a light of hope in the hearts of the bereaved women.

On August 22, 2020, C. Arpita passed away after being attacked by Corona. After that, Simeri Maibedya took charge of the sewing center. At present, the director of the ashram, Shraddheya Simeri Shuvra, is carrying out the responsibilities of the sewing center with poor women.

Simeri Arpita was the 1st Ashram worker in Yeshu Hriday Ashram of Bonpara Dharmapalli. After the untimely death of the sister, the revered Simeri Shuthra is now patiently performing the duties of the Ashram worker.

In solidarity with the priests and the Christians, in the pastoral field in Paris, C. Antony and Rikta are taking as much of the family as they can with indomitable labor.The work of the church, as well as the various annual ceremonies, has kept Kabalil Vamika close to death. At present, C. Pujori is continuing this mission with great sincerity.

The ashram in the heart of Bonpara Yeshu is as far away as Barindra Vami. As a result, may the SMRA Sangha, which is rich in flowers and juices, live forever in the preaching of Mangalbani, may the word of the Lord be preached in the hearts of every people all over the world. I wish that the message of salvation would be spread all over the world for ages.