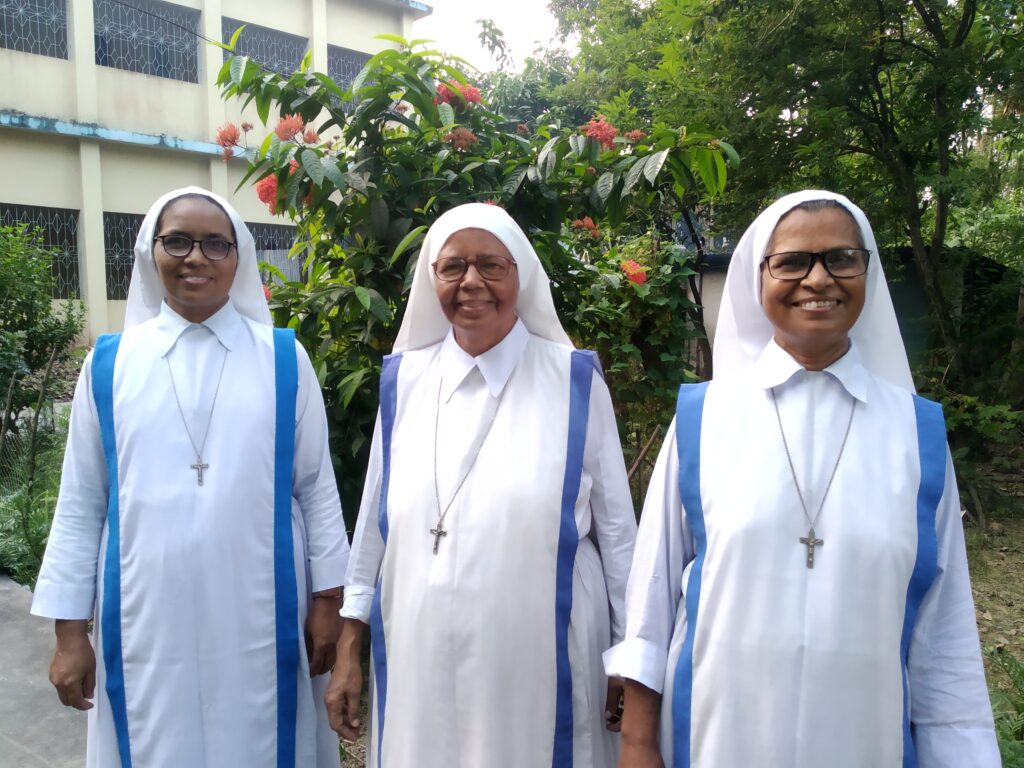 Motivational activities were started from Mathurapur St. Rita Ashram in Pabna district in the year 1947.The Sisters of the SMRA Sangha working in Mathurapur used to visit all these sub-religious villages on a monthly basis and stay in the villages with the people for a week and take care of the spirituality of the Christians.

Failjana Sub-Ashram was established on 24 October 1983, 6 miles south-east of Mathurapur Dharmapalli. The village of Kadamtali is included in the subdivision of Failjana. On the first day, Father Chescato C. Mukta went by boat. The locals greet them with garlands and songs. At that time the Dharmapala of Dinajpur Dharmapradesh was the revered Bishop Theotinius Gomez, CSC. Father Cheskato was the Palpurohit of Mathurapur, Pime.

Ms. SM Tereza was the organizer of SMRA Sangha and Ms. Mary Deepika was an ashram worker from Mathurapur. Ms. Mary and Ms. Mary Mukta took charge of the new sub-ashram for the first time.The ashram was a tiled house surrounded by brick walls. Next to it was a small kitchen. The church on the south side was used as a school house. Sacramento was kept in one corner of the sisters’ house, and only the church was taken on Sundays. Every Sunday a priest would come from Mathurapur to offer Christmas.

The sincerity of the devotees here from Bhawal is well known. Respect, devotion, cooperation and loyalty were instrumental in the successful completion of the Sisters’ philanthropic responsibilities.

She worked as a teacher for the Sisters at St. Francis Xavier’s Primary School in the suburb of Philjana. Mr. Rafael Costa, the headmaster of the school, was in charge from the very beginning. At present, the sisters are the head teachers. The sisters also teach religion and other subjects in each class.
In order to spread the light of knowledge among the shadows, the sisters began to take care of their morals and spiritual structure all the time and became very dear to the people.

After teaching school from morning to noon, the sisters visit the village every afternoon. These devotees from Rangamatia in Bhawal lived here and there scattered in this area. Due to their lack of spirituality, many left Catholicism and converted to Baptist-Protestant religion. The Sisters were able to bring the Catholic faith back to life by giving them the right path and direction from house to house.
At first there were a small number of Catholic families but later most of the families returned to the Catholic faith.
The sisters also visited the Chaisk-Marmi area in addition to Failjana. Many tribals live in this area. The sisters prepared to be baptized into Christianity. He visited villages and imparted religious consciousness to the people, developed marital relations in family life, visited patients, gave medicines, gave sacraments to those in need, imparted prayer education, conducted village-based prayer programs in various congregational festivals, etc.

Since there are no priests here as a sub-district, the Sisters conduct all the Sunday worship, prayers according to different times, etc. Sisters are responsible for teaching the young boys and girls and the newly baptized to pray, confessing, handing over, and preparing for the Sacrament.

Other social and religious activities.

Sisters are responsible for the establishment and management of Kumari Maria’s Sena Sangha Londan, YCS, BCC, Shishumangal, etc. The distressed women contacted the Jagarni Sewing Center in Dhaka and contacted the Jagarni Sewing Center in Dhaka to help the distressed women and some women were given the responsibility of running the sewing center with jute work training. Sisters are involved in various activities such as keeping in touch with the activities of Dinajpur Dharmapradesh, etc. They are doing social development work but are also spreading good news among the people.

The sapling planted like a small vine is now full of flowers and fruits. The number of Christians here in Uroro is increasing. As much as the spiritual, mental, pastoral life of these devotees, the SMRA Sisters are going through school, dispensary and muffsball work Dhaka.