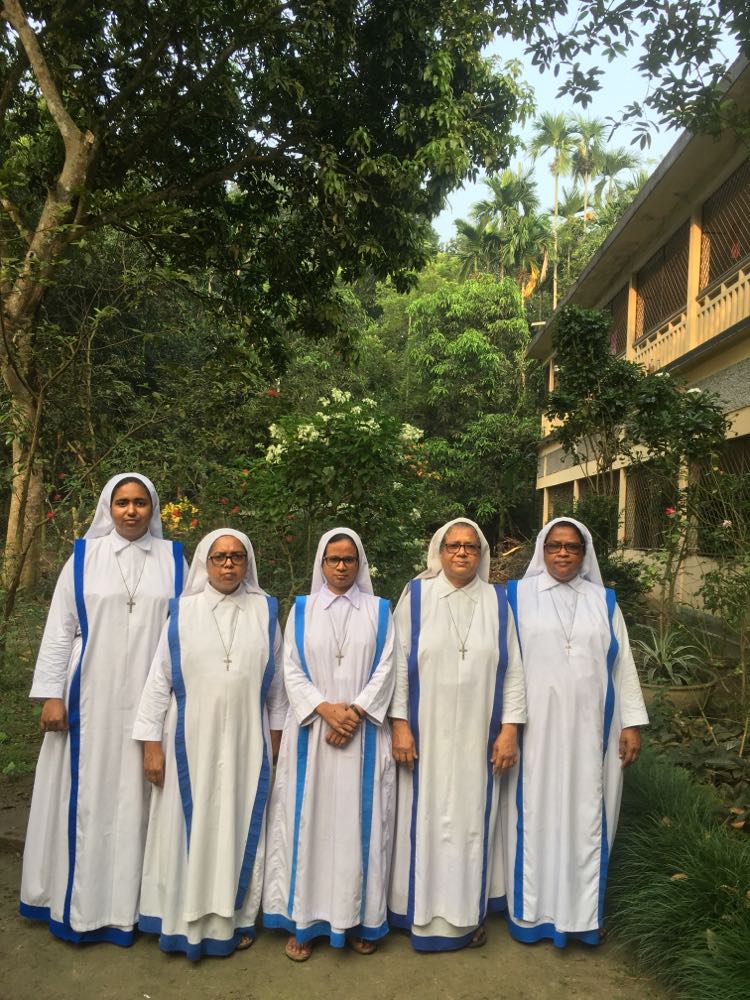 When famine and scarcity were rampant in war-torn Bengal, a large number of Christians from the Bhawal region of Dhaka district migrated to Upper Bengal. They started living in Bonpara, Borni and Mathurapur areas of Rajshahi and Pabna districts through Jamuna river by purchasing a lot of uncultivated land at low prices respectively.Failjana, Chaisk and Marmi sub-villages were established in 1960 with Kadamtali, Nengri, Katjula and Failjana under Mathurapur.The present Mathurapur Dharmapalli is located in the Pabna district of Rajshahi, surrounded by the traditional river Jamuna. Turning to the pages of long history, it can be seen that the area was full of damp forests and full of wild boar.

These animals were ferocious in addition to causing extensive damage to crops and everyone was afraid of them. The early Christians were like the lost sheep. However, the arrival of these Christians and the development of the Dharmapalli is a wonderful history.In the 1092s, a group of Baptist Christians from present day Rangamatia settled in Chatmahar area under Pabna district. Then more people from Bhawal region go there. The men worked on the Ishwardi-Sirajganj railway. At their request, the Dharmapalli of Sadhvi Rita was finally formed in 1946 by the efforts of the Bishop of Dhaka and was administered under the Dharmapradesh.

The first arrival of the Fathers.

It is known from the pages of history that Paul Gomez of Jayarangamatia, who bought the land with the money from the sale of the pig’s tail and donated some of it to the mission. In this way, settlements started to develop there after the land was sold. Everything was fine except for one thing. They thought of themselves as lost sheep. Pabna was not associated with virtually any religion. They wrote letters to various places, hoping for a priest to look after them. Eventually F. T. J. Crowley of the Holy Cross Association came here from distant Dhaka to begin his pastoral work in the area.

The date was June 29, 1925. The priest could not help but be impressed by the sincere faith and beauty of those pioneers. When Father asked for a piece of land to build a house of prayer, Paul Gomez immediately donated the land. Later a religious village named Saddhi Rita was formed on that land. When Mathurapur became a Dharmapalli, F. Dominic Rosario, CSC I took charge of it.

On October 26, 1973, the sisters of the Queen Maria Sangini Sangha of the Apostles came to the Mathurapur Mission. First, Mary began her ministry with the help of Rita, Francis, Anne, Pastor Father Anthony Gomez, and the local people. Work started here from October 29. On 5 November, the then Sanghakar and his ministers and a few other dignitaries from various ashrams attended the inauguration ceremony.

Priests from nearby Dharmapalli, Archbishop Theotonius Gunguli of Dhaka, CSC Pro-Nonsio and others were present as guests at the inauguration ceremony. The inauguration is held through a special Christmas. The devotees of Dharmapalli also communicate in this Christmas. The first temporary settlers, C. Rita and C. Francis, settled down to protect the monastery. Later, when the construction work was completed, they started settling permanently.

The first Ashram dwellers were the revered C. Joseph, C. Rita and C. Ann. On January 3, 1974, Sister Joseph was appointed Ashram Worker and Director of the Dispensary. The first dispensary was opened on 5 January. In this way the sisters of Rani Maria Sangini Sangha of the apostles first started their service in Mathurapur Dharmapalli of Pabna district. They are still working in various favorable and unfavorable conditions.

In imitation of Queen Mary of the Apostles, the Sisters came to the service of the age in Mathurapur Dharmapalli of Rajshahi Dharmapradesh to provide unconditional and joyful cooperation in inspiring Christ and his church, especially among boys, girls, children, adolescents, women and the afflicted. At present 2 sisters are doing efficient work of management in Mathurapur school. Moreover, under this Dharmapalli, Kathuli is working in collaboration with the school teachers of the village. The results of the Wur Wur School exams are also getting better and thus the villagers are benefiting a lot.

A Sister Moffsball is constantly engaged in inspection and philanthropic work. He also goes to Chachkia Upadharmapalli every month for charity work. She is serving the people through Kumari Maria Samiti, Sena Sangha, Yubati Bauder Meeting, Paris Committee and School Committee Meeting, YCS, Sebak Dal Meeting, Shishu Mangal Samiti Management, etc. There was a sewing center for the elderly, unemployed, uneducated young girls to keep them busy and get some financial help. A sister handled it. In particular, efforts were made to improve social life. But now the sewing center has been closed for various reasons.

Going to the village to help with the Christian way of life to solve various problems Nimio to visit the village prayer family in the village to help solve various problems and to advise young wives / daughters to improve their financial and social life, prepare for marriage, advise those in danger to return to the right path. , Etc. Sisters are contributing to the work. Mathurapur Mission has a dispensary and maternity hospital. A nurse sister manages it. Here everyone, irrespective of race, religion or caste, can receive treatment. Visiting patients in the village in the afternoon, maintaining contact with rural midwives.

Those who lost their lives due to neglect and illiteracy are taught. Every Saturday once a month they go to the dispensary closed rathe to do antenatal check up of pregnant women in Failjana subdivision and to visit sick and elderly patients in different villages. Antenatal checkups of pregnant mothers are conducted every Wednesday afternoon and education / counseling on natural family planning and prevention methods is given.

At present, we have to face some problems while doing all these things. E.g.