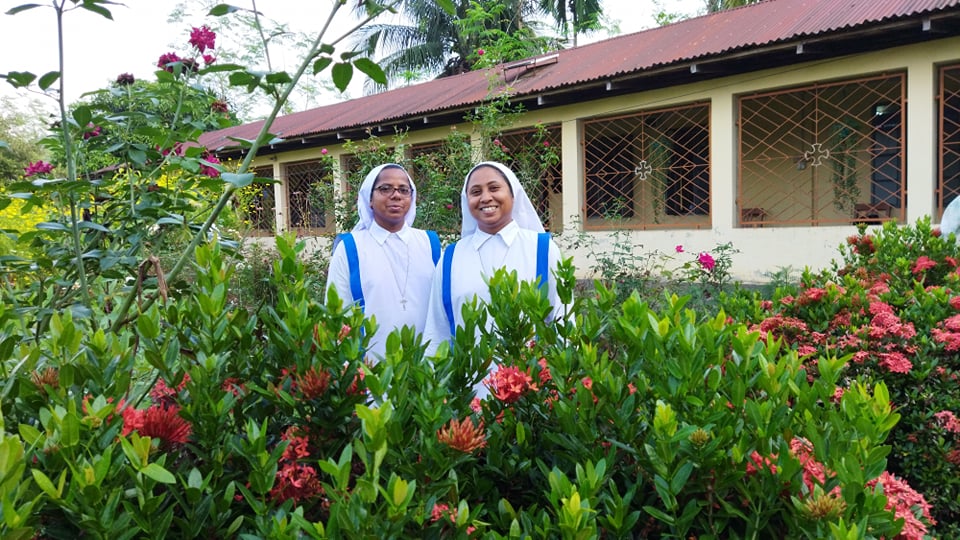 Man is the best creature of creation. He has also given man the right to create new beings as the best creatures. So man has become creative by using his physical, mental and spiritual values. In the family we learn religious values, love, respect, honor, compassion and human dignity and a friend-friendly environment. So if virtue is practiced in every family, then Mishu teenage boys and girls, young men and women will find new and good life and will become ideal people.At the same time, with the help of parents, cooperation in their life will bring many good and auspicious fruits.

Dharmapalli is a religious institution of Christian believers. Where children and teenagers, boys and girls, young and old, old and young, from the grassroots to the elderly of the Christian community, all are taught to practice religious rituals and practices of spiritual life in their daily life.And through these, a believer is baptized into Christ, joins the Christian church, and lives the life of a believer in Christ. Thus Christians became an ideal family sought by civil society. Which will give peace and harmony to the society and the nation. Inspired by the same purpose, our Archbishop Mr. Montu Kanta Bandharban is surrounded by greenery around the traditional Dharmapalli of Chittagong. This religious village is located in the district headquarters of Bandharban.Boangchhari, a sub-village of Bandarban Dharmapalli, is situated about 18 km to the east of it. Currently where the Boyangchhari Mission is located. To the east of it, a stream flows from Kachtali to Thatkshatpara.

It joins the Sangu river at Bandarban Sadar, passing by the market of Boatchhari upazila. This is the route that Romang Chhari used to come to first.However, at present, in some places, high and low paved roads have been paved from Bandarban to Boangchhari. As a result, the people living in Roangchhari Upazila have a far-reaching improvement in trade and commerce. At present the work of paved road from Boyangchhari Upazila to Ruma has been started. This is facilitating the movement from one upazila to another. In this way, there has been an opportunity to bring the goods produced from remote areas to Bandarban Sadar.The standard of living of the people is gradually improving and some financial prosperity is coming. It is also benefiting the students. The location of Roatchhari College is close to our mission. This allows students from Ruma to study here. Again, they are getting the opportunity to come and study here from the remote area of ​​Romanschhari. The followers of different religions live in the vicinity of Boangchhari sub-religion.

Marma, Bar-ya, Khyang, Tripura, Hindu, Muslim. 2002-03 AD: Land was purchased. Houses were built in 2004-06. Until August 2013, the Shantirani Sisters began staying with the girls in the hotel permanently. After that Chole came in the month of August 2012. The boys’ hostel was built in 2006. 2009 AD Dispensary and food jar were raised. There was no sister till 2013-15 AD.Churches are not yet regular in Boangchhari sub-religion village. After first purchasing the land, houses were built for the girls’ hostels and sisters. The purpose of building the hostel is – in Boangchhari sub-district, our Christian people live in remote areas and many high hills.The young boys and girls will continue to come and study in this hostel to shine the light of education among them and to teach them spiritual and moral values. By getting spiritual and moral education, they will make their life beautiful and become ideal and well-organized people. This was the main purpose of the revered archbishop Majes Montu.

The purpose of bringing the sisters here is that the little boys and girls in this hostel leave their mothers, fathers, brothers and sisters and relatives from far away. To give them as much service and love as parents. Sisters should look after and love them as guardians and take care of them as much as possible. To give them moral and health education in religious education.

Second: Sisters go to school. Where Christians are united in praying to hear their joys and sorrows, to know their problems, to seek health care advice, and to visit every family.One of the main duties of the sisters is to report to the bishop by performing the above activities. What else can be done, what is better to do is to discuss with the bishop. Before that, it is necessary to discuss all the issues with the pastor of Dharmapalli.

At the call of Dharmapala of Chittagong Dharmapradesh, first SI Sister Gon came to Royatchhari. Prior to 2006, they came to Bandarban in 2004 and lived together with the S, M, R, A sisters in the old house. From 2006 to August 2012, the Sisters of Peace lived permanently in Roatchari. At that time, Sisters used to go to Moxball and teach at school. There is a primary school at Battali in Roatchhari. It was run with the help of the members of the managing committee.

So the sisters were able to attend school easily. At present the school is officially registered. Now it is not possible to work in school like this. There was no sister in Roangchhari till 2013-15 AD. At that time the master and grandmother of the hostel used to take care of the boys and girls. After that, when the archbishop went there, the boys and girls looked like orphans.

The thing was only Archbishop Majes Kastai felt. So he temporarily brought the L, A, C sisters in January 2016. They went to Chole again in December. Sister Clara and Sister Mary Heido of the Sisters of the Queen Maria Sangini Sangha of the Apostles in Roangchhari in the sub-religion of Bandarban Dharma Palli in response to the late Archbishop Majes Montu Costa C, S, C Asban on January 25, 2016. He left Dhaka on the night of 17 January.

At that time the pastor priest was the revered landlord Subir Sarkar C, S, C. At the meeting, Sister Jonah Rail will have two new sisters in Roangchhari. The subject said and wanted to know, what kind of work should the sisters do? And the idea of ​​the overall cooperation of the fathers. He also expressed his desire and interest to show the place.

It was decided, subject to discussion, that after lunch on the afternoon of January 21st, after the meal, the venerable Sister-General, Sister Mary Consolata Mahendro, would do just that. After the end of the conference before lunch on the 21st of January, Mahendra had a special meeting on the subject of climbing the mountain and went to Boangchhari.

Going there, he wandered around the mission compound. After that the boys and girls master Mr. Anup and his wife Zinnia Tripura arranged some water meal for them. They ate it and came back to Bandarban. They returned and told the sisters everything. How do they feel in Boangchhari?At the same time, he said, the day the Father takes the Sisters, the Sisters will go and act in the way that the Father directs. On January 24, Sister Yomela and Sister Pujari went to Romangchhari to build a house for the sisters.

On 25th January, 2018 at 8 o’clock in the morning, the Rev. Father Dominic Sarkar, the Pastor of Bandarkan Dharmapalli, the Reverend Father Reuben Gomez, the Assistant Pastor of C, S, C, Sister Mary Take it from Bandarkan to Mahendra in Roangchhari. At 9.30 am, the feast of Christ is celebrated, wishing good luck to the sisters. This is followed by a cultural program. Sisters are picked up at the same time through this ceremony.

Reishta fans are very happy and happy to see and see the sisters. Speaking on the occasion, the venerable Pal priest Father Dominic C, S, S said that as a nurse, Sister Theodora would serve the patient as much as possible and go to the neighborhood. And Sister Clara will help the boys and girls in the field of education as an ideal teacher and will go to the neighborhood. In this way, Anrik thanked everyone and said goodbye with a sweet face.

After lunch, in the home environment of the sisters’ dining room, he added, “Sister, don’t be too busy to go to the village first.” As you tidy up your belongings, you need to get to know the people of different religions in the neighborhood who are living there permanently, visit their homes and have a good relationship with them.

That is, they have to identify themselves locally and get acquainted with others. After that he said to think of going to the village. He added that he would list the necessary items and send them to the diocese. The rest will be parish.

On that day, Father Gon went to Bandarban Chole in the evening after having tea and tiffin in the afternoon. C: Priest and Sister Joseph stay with Sister Theodora and Clara for five more days. Sister Theodora and C: Joseph went to Bandarban in three days to accompany them and tidy up the house. He returned to Roangchhari in the afternoon with some necessities, bed sheets, mosquito nets, dish bowls, curtain basins, sewing machines and many more.

She expects the Sisters to help in the same way that Shantirani worked or helped them in the previous Sistergun study. At the same time the program for the Children’s Day celebrations is fixed. At the end the wheel is finished. In this way the Sisters gradually started their motivational work in Roatchari and continued to move forward through scarcity.

In the meantime the list of essentials was sent to Archbishop Hauch. From there Rs 50,000 was fixed for Roangchhari.
With that money he bought 1 steel cupboard for the dining room, 1 cupboard for Theodora and 1 big box for keeping words, blankets and other things, and 3 cool rugs for the chapel.

We need the help and support of various sisters in our association to buy small things. Chapel’s cane wrap, and Matt pays homage to Sister. The monstandar donor Joabim C, S, C donated to the sisters. Boys and girls are required to perform holy worship. Chapel truss stones and pictures were also made. The Sisters of Bandarban, Jamalkhan and Pahartali built the ashram at Roangchhari SMR with the help of necessary items.

Respected Sister Teresa gave the little box to the patient to take the sacrament home. In this way, the ashram is completed with a small donation of many small things. Posting: – Taking coaching classes for boys and girls from 8.30 am to 9.00 am. Teaching religion and morals every Friday, taking music classes on Saturdays.

Doing child welfare classes, teaching about sacraments, talking to them, going to the family and making rosary garlands etc. Christians also come from remote areas on working days. Talked about their problems and diseases. Listen to them and help them with wisdom advice and medicine. Helping and collaborating where the service is working locally.

Indigenous people, such as children and adolescents, young and old, are taught physical, mental and spiritual education and health, hygiene and the environment. Prevents waste and eliminates excessive consumption luxuries and helps to build a frugal attitude by being frugal.

In this way, the fifth year of the work of sending S, M, R, A sisters to Roangchhari is gradually going on. I pray that the situation in the country will return to normal. Then the work of sending among the hill brothers and sisters will become more fruitful. May God continue the great work through them in this way, I bless you.